Football & Wine: Players and a Coach Tackling the Wine Game

Football and wine go together better than you might think. These top athletes and a coach are no strangers to hard, physical work. They know how valuable it is to have the right team around them to achieve something stellar. And a little cash from their football success adds all the elements they need to be successful in the wine game.

Bledsoe was the New England Patriots QB from 1993-2001 right before the Tom Brady dynasty began. Bledsoe finished his career playing for the Buffalo Bills and then the Dallas Cowboys before retiring in 2007. At that point, Bledsoe “doubled back” to his hometown in Washington to start a winery in Walla Walla Valley called Doubleback.

Drew and his wife launched the winery in 2008 with a focus on Cabernet Sauvignon. They also produce Malbec, Merlot, Petit Verdot, Syrah, Viognier, and Cabernet Franc. These wines use grapes from the Doubleback estate only which includes four different vineyard sites.

And if two wineries weren’t enough, he’s got a third one coming in 2020 named Bledsoe | McDaniels. Josh McDaniels is the winemaker for all of the Bledsoe wine brands. This venture will produce Pinot Noir sourced from Willamette Valley, Oregon and Syrah sourced from Walla Walla, Washington.

Woodson became intrigued by wine and the social connections it creates, while he was at training camp near Napa Valley.

After his retirement, Woodson launched Intercept offering a Cabernet Sauvignon, Chardonnay, Pinot Noir, and a red blend. The grapes are sourced from Paso Robles and Monterey in California.

Of course, the name Intercept comes from Woodsons’ career of foiling offensive strategies culminating in a career total of 65 interceptions.

Elway is a Pro-Football Hall of Famer and the former Denver Broncos QB from 1983-1999. He can’t get enough of the Bronco’s as he is the current President and General Manager of the team.

In the meantime, he also founded 7Cellars in Rutherford, California. Elway partner with Rob Mondavi Jr in this endeavor. Yes, Rob is the son of the infamous Robert Mondavi.

They also have a charitable focus with wine sales supporting Team Rubicon, a non-profit that supports veterans and first responders.

Hoage is a Former NFL Safety. He played for 13 seasons with six different teams from 1984 to 1996. In 2002 Hoage and his wife established TH Estate Wines in Paso Robles, California. Their wine labels have a modern, elegant look with cross-references to both winemaking and Terry’s football career. For example, their Grenache wine named SKINS references grape skins that add color and tannin to wine and references Terry’s time playing for the Washington Redskins.

The winery focuses on a minimalist style of winemaking which means they produce Natural wines that aren’t filtered. They produce French Rhone-style wines which means they use Rhone red grape varietals of Syrah, Grenache, Mourvedre, as well as, Rhone white grape varietals of Grenache Blanc, Picpoul Blanc, and Roussanne. In 2016, they started a second brand, Decroux. Under this brand they produce Pinot Noir and source the grapes from the Central Coast, California.

TH Estate Wines give back through the MUST! Charities, a non-profit organization that Terry founded. The organization provides support to those living in poverty in San Luis Obispo’s North County, California.

Dan Marino is a Pro-Football Hall of Famer and former QB for the Miami Dolphins. He had an outstanding football career playing for the Dolphins from 1983 to 2000. Damon Huard was a backup QB for Marino from 1997-2000, along with playing for several other NFL teams during his football career. The two shared a love for wine and decided to become business partners, opening Passing Time in Washington.

Their winery focuses on Cabernet Sauvignon with grapes coming from three of their vineyards located in Horse Heaven Hills, Red Mountain, and Walla Walla.

They also offer a Columbia Valley Red that is a Bordeaux style red blend, boasting 91+ ratings. Their wine named Block 1311 is a 100% Cabernet Sauvignon and boasts a 94+ rating from Wine Advocate. Seems like they’ve got the hang of this winemaking thing.

Mirer is a former NFL QB who played for a variety of teams from 1993-2004. Mirer fell in love with wine while in the bay area playing for the San Francisco 49ers. He started Mirror Napa Valley shortly after his retirement from football in 2004.

The infamous Dick Vermeil is a super-bowl winning former NFL coach. His NFL coaching career ran from 1976 to 2005 with his last coaching job as head coach of the Kansas City Chiefs. He retired in 2005 and turned his full attention to wine.

Then in 1999, Dick Vermil partnered with a local winemaker to produce Jean Louis Vermeil Cabernet Sauvignon named after his great-grandfather. With this first commercial wine production, Vermeil Wines was born.

Today the winery offers 11 different wines including Cabernet Sauvignon, Zinfandel, Chardonnay, Sauvignon Blanc and more. They source grapes from Napa and Sonoma, even from some of the same vineyards where they sourced grapes for their own family wine.

Looking to enjoy football and wine while showing your team spirit? You may be in luck as several sports teams have branded wines. Check out Manos Wine for Pro and Collegiate sports teams branded on wine bottles. 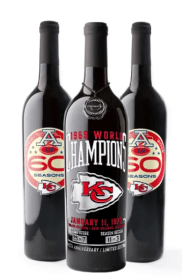 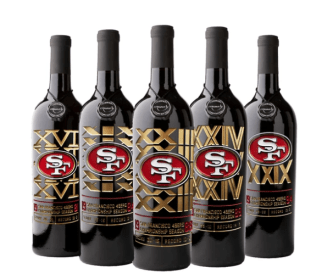 For this year’s SuperBowl they have a Kansas City Chiefs 50th Anniversary edition and they’ve got all the San Francisco 49ers Super Bowls commemorated. These wines are red blends of Cabernet and Merlot sourced from California. They also offer team-branded sparkling wine which appears to be popular because they are all sold out.

With this team branded wine you have one more way to show your team spirit!